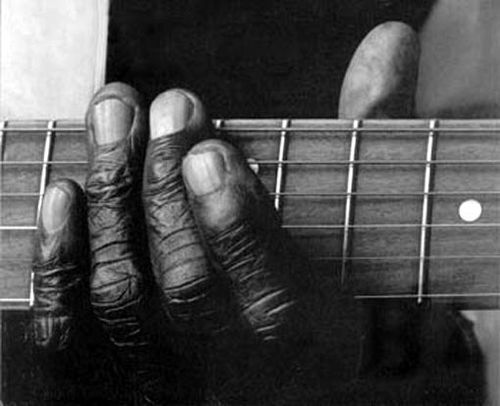 -->
When I was just a kid, struggling to wrap my mind and my fingers around the I-IV-V blues progression, I had occasion, one Saturday night, to listen to a real master of the form. I forget where that was. Some club in Old Town, maybe.
They called him something like “Delta Slim Johnson,” but his given name was Otis. He was scarecrow lean, with a craggy face and permanently bloodshot eyes. Kept his kinky grey hair clipped close to the skull, and a pencil-thin mustache lay along his upper lip like an indolent snake taking in some sun. Had more gold in his teeth than they had at Fort Knox. Smoked Lucky Strikes, like me, so he had to be a man.
With a bottle on his little finger, he did some fine sliding solos, tuned to E major. His fingers were gnarly and crooked, like a bare-knuckle boxer’s. Hard work hands.
Though he drank his share of Jack Daniels, you couldn’t tell from his voice. He had a deep baritone that made Darth Vader seem like a squeaky soprano, and mournful lyrics flowed from his throat like an Ole Man River of honey, but with the urgency of an escaped slave running from the bloodhounds.
Yeah, daddy-o, he could play him some blues.
Too Much Bourbon Blues.
Copulatin’ Blues.
Knife-fightin’ Blues.
Baby Lef’ Me Blues.
Dirt Poor Blues.
Miss My Momma Blues.
Wanna Go Home But Ain’t Got None Blues.
Lynched My Daddy Blues.
Old Dog Blues.
I sat at a table in that cramped club, sat so close I could have barred chords for him, so close that his pain made my gut tremble like a tuning fork.  He couldn’t avoid noticing me. Partly because I was right up front, partly because I stuck out like a dildo on a tree trunk.  Every other face in the crowd was Black.
Not like me.
Now, my old man was half Indian, and if we have to pick sides for a ball game, that's the team I’m batting for.  I’ve got some of the features – the eyes, the cheekbones, the attitude. But I could pass for White. Most people look at me, they don’t think “Native American.” They think Italian. Spanish. Greek. I’m kind of a reverse apple: I’m White on the outside, but I’m Red as I can be on the inside.
I approached him between sets.
“I really dig your music,” I said, and asked if I could buy him a drink.
Later, we had a conversation, sipping bourbon, chain-smoking Lucky’s. “Conversation” is charitable. He talked; I listened.
He hailed from Mississippi.
As a child, his father had taught him, not only how to play the guitar, but  how to survive, being Black in a White Man’s World, made him memorize the rules like Bible verses or multiplication tables, so he’d never forget.
You forget, you die:
Never look any White man in the eye. Keep your gaze down, boy.
Never raise your voice to a White man.
Never contradict anything a White man says. Don’t even question anything he says.
Never make any sudden moves.
Always smile, be polite. Call every White man “Sir.” Call every White woman “Ma’am.”  If it’s the poeleece, call ‘em “Boss.” They likes that.
Whatever a White man or woman asks you to do, you do it.
The White Man is always right, even when he’s wrong ---especially when he’s wrong.
The White man is always tellin’ the truth, even when he’s lyin’ – especiallywhen he’s lyin.’
Nobody’s gonna take your word over a White Man’s word on anything.
Might makes right and White makes right and the White Man’s got both.
Don’t give a White Man a reason to come at you. They don’t needs one. They can make one up if they’re in a mood to do it, and there ain’t nothing you can do about it but pray that you don’t be in the wrong place at the wrong time.
There was more to it.
But it didn’t get any better.
Made me want to holler.
Or puke.
Or weep.
Or shoot somebody.
Now I’m sitting here, decades later, taking a break from playing some blues. And I remember back to that conversation with Delta Slim, who's, by now, certainly playing an extended engagement in that great roadhouse in the sky.
See, I just watched a video clip somebody put out on the internet.
It’s a video advising the public on how citizens should conduct themselves when interacting with the police, so said citizens can avoid being tasered, or shot or beaten to death.
And it hit me like a short left hook.
It was the same exact advice that Slim’s daddy had given him.
If that doesn’t suggest something to you, it sure as hell should.
LIBERTY & JUSTICE,
sj