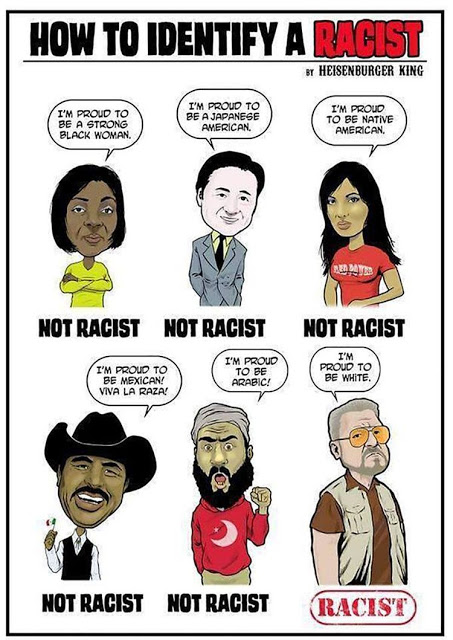 Here’s a little meme that perfectly expresses the problem – but not, I suspect,  the problem that the artist thinks he was expressing.  The arrogance, ignorance and Olympic-quality narcissim in this cartoon is staggering.
Here's why:
For 500 years, White people in North America have had it all their own way.
For 500 years they’ve hammered Blacks, Indians, Asians, Hispanics --- well, hell, ALL NON-WHITES, as if White people were the cream of the crop of creation, and the rest were just negligible pieces of shit. They enslaved, Blacks.  They murdered Indians.  They put Japanese in concentration camps. And so on and so on, ad infinitum, ad nauseum.
500 years of oppression.
500 years of telling these non-white folks that they were inferior, sub-human, second-class citizens.
Mongrels.
Mud People.
Even the lowliest, poorest, most uneducated white trash, could be secure in the knowledge that he was still, at least, superior to even the most educated and accomplished Black man.  Until very recently, it was virtually impossible to convict a White man of murder  when the victim was Black – and equally impossible to acquit a Black man of murder when the victim was White.
When you're told every day that you’re inferior, stupid, worthless, lazy, and good-for-nothing, BECAUSE OF YOUR RACE,  to have PRIDE in your race is a revolutionary act. An act of rebellion against tyranny. To have pride in your slandered race is to spit in the face  of your oppressor, the first step in casting off the chains of oppression. People without pride are compliant, and subservient. People with pride don’t go down to oppression without a fight. For non-white folks to be “proud” of their race, isn’t “racism.” It’s self-defense. Non-white folks wouldn't have NEEDED that special pride, had they not been oppressed by White folks in the first place.
Now the flip side  of the story is different.
For White people – who have enslaved, murdered, raped and robbed with impunity (and often STILL do) BECAUSE they were White – to have “pride” in their race is really saying, “Yes, we ARE superior, we had a RIGHT to do all  the rotten shit we’ve done because we’re White, and we're not one bit sorry, so get over it."
If positions were reversed, if Blacks had enslaved Whites, then the reverse would be true: to be proud of being Black would be arrogant, and White folks would be the ones rebelling against oppression.
But that’s not the historical case, now, is it?
White people are SO accustomed to their privileged position that when non-whites want the equal rights due to them, White people actually feel that their own rights are being taken away!  They actually believe that they have  "right" to discriminate against non-whites, and NOT being allowed to discriminate against non-whites, is discrimination against Whites!  This reminds me of the "heroic defenders of the Alamo" who fought for "freedom." But what exactly was the freedom they were fighting for? The "freedom" to to own slaves.
So when when White people whine about being picked on, it’s EXACTLY like the playground bully who finally gets punched in the nose by a rebellious victim, and goes running to teacher bawling, “He hit me, and I wasn’t doin’ nothin!’”
Fuck him.
I suppose there are folks who will claim that “White Pride” is no different from “Black Pride,” or “Indian Pride.”
These are the same folks who would claim that a RAPIST who uses force  or the threat of force to coerce a woman into sexual compliance, and a WOMAN who shoots the would-be rapist to protect herself, are both using “violence.” In this demented view of reality, RAPE and SELF-DEFENSE are morally equivalent acts.
They aren’t.
One is assault. The other is self-defense
“White Pride” and non-white pride aren’t morally equivalent,  either.
The only folks who say so are either lying, or just plain stupid..
Liberty & Justice,
sj